Impeccable chromosome segregation during mitosis underlies genome stability and integrity. Any errors in this process would result in miscarriage, birth defects and/or aneuploidy, the hallmark of human cancers.

Segregating each sister chromatid towards the opposite poles is implemented by the mitotic spindle, a dynamic ensemble of microtubules, microtubule-associated proteins (MAPs) and motor proteins. Nucleation of microtubules in vivo does not occur spontaneously; instead specialised structures called microtubule organising centres (MTOCs) are required, in which the minus end of microtubules is embedded. In animal cells, the centrosome comprises a major MTOC, whilst in fungi the spindle pole body (SPB) plays an analogous role.

Our laboratory has been uncovering the principles of microtubule structure, function and regulation using the genetically amenable model system, the fission yeast Schizosaccharomyces pombe, and more recently we have been using zebrafish and human culture cells to scrutinise the evolutionary conservation of our findings obtained from work in fission yeast. The long-term goal of our laboratory is simple; to understand the molecular mechanisms of how the mitotic spindle ensures faithful chromosome segregation.

During 2014, we have made seminal progress in the following two areas. First, we have uncovered the conserved molecular mechanism by which the minus end of microtubules is tethered to the centrosome and further identified the physiological defects when this process is perturbed. Second, we have determined the molecular pathway leading to the recruitment of the conserved MAP complex, Alp7/TACC-Alp14/TOG, to the SPB upon mitotic entry and shown that this process is critical for mitotic spindle assembly.

The centrosome plays the multi-layered roles in both yeasts and vertebrates. These include the canonical role in microtubule nucleation as the MTOC, cell cycle transition as a structural hub integrating cell cycle regulators and ciliogenesis as the basal body. In addition, there is at least one more critical role, i.e. anchoring of the microtubule minus end. This mechanism ensures that interphase microtubule arrays emanate from the centrosome and that structure and orientation of mitotic spindles are safeguarded. However, our knowledge of microtubule anchoring to this organelle remains surprisingly limited at the molecular level.

We previously showed that in fission yeast, a mitotic specific SPB component, Msd1 (mitotic spindle disanchored 1), is required for anchoring the minus end of spindle microtubules to the SPB (Toya et al., 2007, Nat. Cell Biol. 9:646-653). Now, we have identified the human and zebrafish Msd1 orthologues (Figure 1A) and characterised their roles in microtubule anchoring. We have unveiled that the human Msd1 (hMsd1) protein is delivered to the centrosome in a centriolar satellite- and dynein-dependent manner, wherein it physically binds the microtubule-nucleating γ-tubulin complex (Figure 1B). siRNA-mediated hMsd1 knockdown results in disorganised interphase microtubules due to the inability of the microtubule to be tethered to the centrosome (Figure 1C). During mitosis, mitotic spindles become abnormally tilted and misoriented, which is attributed to the release of astral microtubules from the centrosome, leading to a faulty interaction between microtubules and the cell cortex (Figure 1C).

Moreover, we have found that in both humans and zebrafish, the Msd1 orthologues are critical for ciliogenesis. Remarkably, the loss of Msd1 leads zebrafish embryos to left-right asymmetry defects (Hori et al., 2014, EMBO Rep. 15:175-184; Hori et al., 2015, Mol. Biol. Cell 26:2005-2019). Collectively, the Msd1 proteins are the first molecules to be identified as the conserved microtubule-anchoring factors. 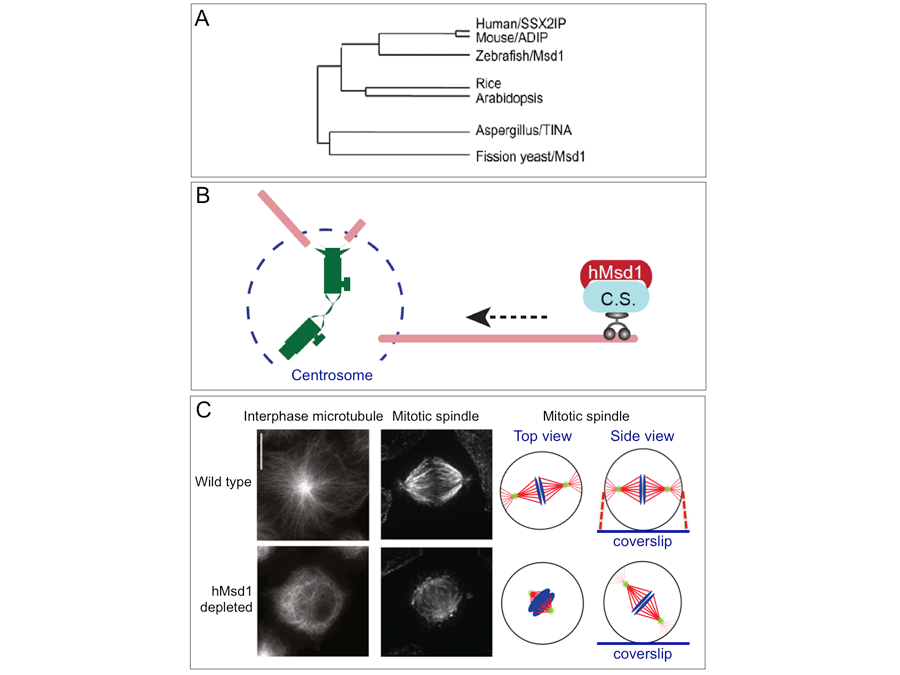 (A) Phylogenetic dendrogram showing the evolutionary relationship among Msd1 orthologues. Msd1 orthologues in human beings, mouse and Aspergillus nidulans also are called, SSX2IP, ADIP and TINA respectively.
(B) A model of hMsd1-mediated microtubule anchoring to the centrosome. hMsd1 (red) is transported to the centrosome accompanied by centriolar satellites (C.S. light blue) and the dynein motor (grey) along microtubules (thick pink lines). Upon delivery to the pericentriolar region, hMsd1 interacts with the γ-tubulin complex (not shown), thereby directly anchoring microtubule minus ends to the pericentriolar material. Paired centrioles each containing procentrioles are shown in green.
(C) Disorganised microtubule morphologies upon hMsd1 depletion in U2OS cells. Microtubule structures during interphase (the far-left panels) and mitosis (the second panels) in control (top row) and hMsd1-depleted cells (bottom row) are shown. Schematic microtubule structures showing spindle (mis)orientation in relation to the substratum (coverslip) are depicted on the right-hand two panels (top and side views). Note that spindle microtubules are rotated randomly upon hMsd1 depletion, as astral microtubules become unstable, by which they cannot interact with the cell cortex to maintain horizontal spindle positioning. Bar, 5 μm.

The Transforming Acidic Coiled Coil (TACC) family proteins were originally identified as a group of proteins implicated in human cancers, and the family is conserved throughout evolution. TACC orthologues in various organisms localise to the centrosome. These proteins form a stable complex with another conserved TOG/Dis1/XMAP215 MAPs in virtually all organisms examined, which is essential for spindle assembly and proper spindle microtubule-kinetochore attachment.

In human cells, either downregulation or upregulation of the TACC proteins is intimately linked to tumourigenesis, and their expression profiles are used for cancer prognosis. In fact, centrosome abnormalities associated with defective spindle assembly are one of the hallmarks of cancer. The molecular understanding of the mechanisms underlying centrosomal recruitment of the TACC proteins, therefore, is of critical importance for the aetiology of cancer and other human diseases. However, at the moment, which molecule(s) localising to the centrosome/SPB is responsible for the recruitment of the TACC-TOG complex, i.e. a receptor for TACC at the centrosome, remains elusive.

In fission yeast, Alp7/TACC and Alp14/TOG also form a stable complex, which is critical for mitotic and meiotic spindle assembly and proper chromosome segregation (Sato et al., 2007, Nature 447:334-337; Kakui et al., 2013, Nat. Cell Biol. 15:786-796). Now we have determined clustered five amino acid residues within the TACC domain of Alp7 required for SPB localisation. Critically, these sequences are essential for the functions of Alp7, including proper spindle formation and mitotic progression. Moreover, we have identified pericentrin-like Pcp1 as a receptor for Alp7 loading on the mitotic SPB (Figure 2). 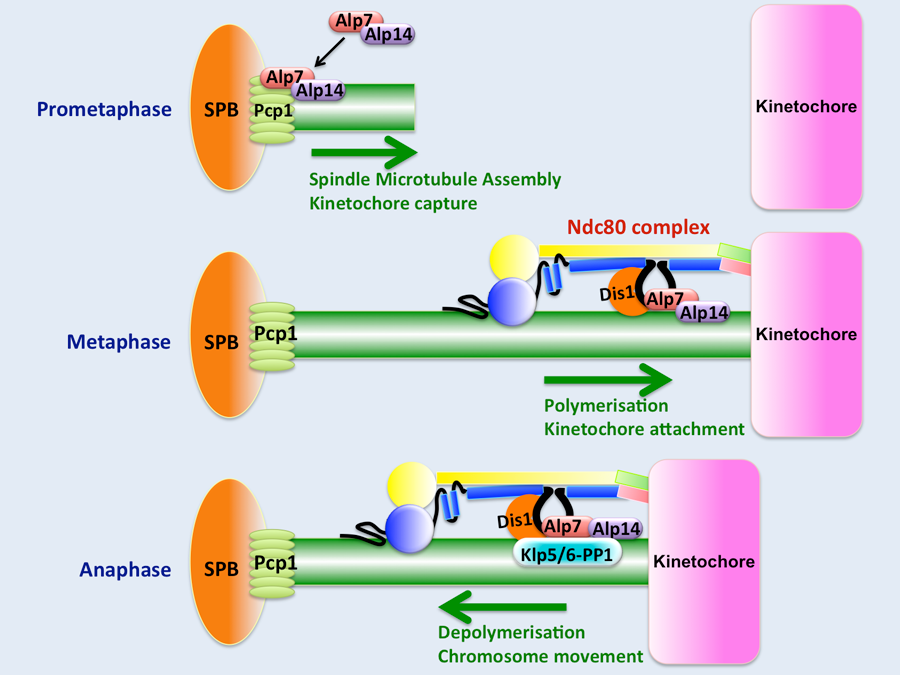 Upon onset of mitosis, the conserved Alp7/TACC-Alp14/TOG complex is loaded on the SPB (a centrosome equivalent) by directly binding to pericentrin-like Pcp1 (top, prometaphase). The Alp7-Alp14 complex at the SPB promotes spindle microtubule polymerisation towards the kinetochore, in which Alp7 in turn binds to the outer kinetochore component Ndc80. This interaction establishes proper microtubule-kinetochore attachment (middle, metaphase). Dis1/TOG also binds to Ndc80 and is essential for kinetochore capture in cooperation with Alp7-Alp14. Alp7 subsequently recruits the kinesin-8-protein phosphatase complex (Klp5-Klp6-PP1) to the microtubule-attached kinetochore. PP1 triggers anaphase onset by silencing the spindle assembly checkpoint, while Klp6-Klp6 accelerates poleward chromosome movement by inducing microtubule depolymerisation.


We have uncovered the mechanism by which cells enter anaphase when proper spindle-kinetochore attachment is established. We show that Alp7/TACC at the kinetochore recruits the protein complex consisting of protein phosphatase I (PP1) and kinesin-8. This recruitment results in the two outcomes in the end of mitosis; PP1 silences the spindle assembly checkpoint, resulting in anaphase onset, while kinesin-8 promotes poleward chromosome movement, ensuring faithful chromosome segregation during anaphase A (Tang and Toda, 2015a, J. Cell Sci. 128:354-363).

We also put forward the hypothesis that explains why in many cancer cells a subset of mitotic genes are overexpressed. We propose that the overproduction of the outer kinetochore protein Ndc80/Hec1 would abnormally bind a number of interacting molecules, which leads to the sequestration of these interactors from their normal locations. This abnormal absorption in turn impairs the stoichiometry within individual protein-protein networks. This disturbance, then on the one hand, interferes with chromosome segregation, leading to the production of aneuploidy, a hallmark of cancer, and on the other hand, it activates the cellular compensation machinery, by which other mitotic genes are further overexpressed to tackle the imbalance through a feedback loop (Tang and Toda, 2015b, Bioessays 37:248-256).